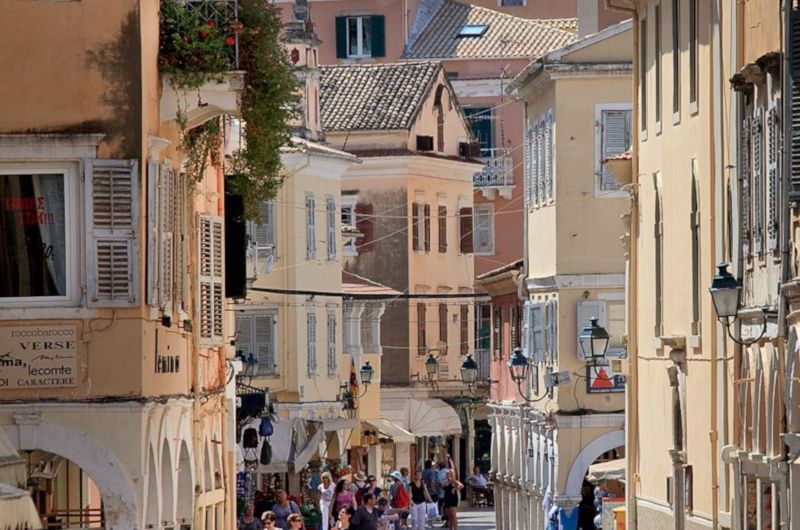 Owing to these treasures and marvels, Corfu is considered to be one of the most elegant towns in Greece, offering plenty to visitors and local alike, which is why Unesco supports the preservation of its cultural heritage.

Corfu Town's architectural styles create the unique charm reminiscent of various cities of Italy. Flanked on either side by a fortress, the many Byzantine churches and the flower squares make the atmosphere of Corfu Town unique and enchanting and the ideal place to explore.

The historical center of the town is situated in the northern region between Esplanade Square and the new fortress. Esplanade Square is the central square of Corfu Town and is surrounded by georgeous Venetian buildings and an old fortress. Cavalieri Hotel is siutated in its very heart right opposite the Old Fortress with magnificient views to the Old Fortress and Ionian Sea.

To the west of the Square - in only 5 minutes walking disctance lies the beautiful Liston building which was built during French rule. This building is home to some of the best cafes and restaurants in Corfu Town. The Town Hall Square, the Square of Saint Spyridon, Ionian Academy and Palace of Saint Michael and Saint Georges are some of the other monuments that add to the charm of Corfu Town.

The people of Corfu, known as Corfiots, are gentle and cultured people and boast of traditions, and a rich musical and arts heritage. For this reason, you will find that there are several choirs that sing on a regular basis at different Corfu events. The singers are known as ‘kantadore'.
During Venetian times until the Second World War, opera became the favourite form of musical expression, and even today the performances are greatly appreciated. An old saying, dating back to the last century rightly expresses this sentiment: ‘To be applauded in Corfu is to be sure of international success'.

Corfu is also replete with many art galleries that host permanent as well as temporary exhibitions. The displays include the art works of international as well as local artists. The modern theatre and various other romantic outdoor locations serve as venues for a great variety of Corfu events including rock concerts, contemporary dance performances, performances by the island's symphony orchestra and theatrical works.